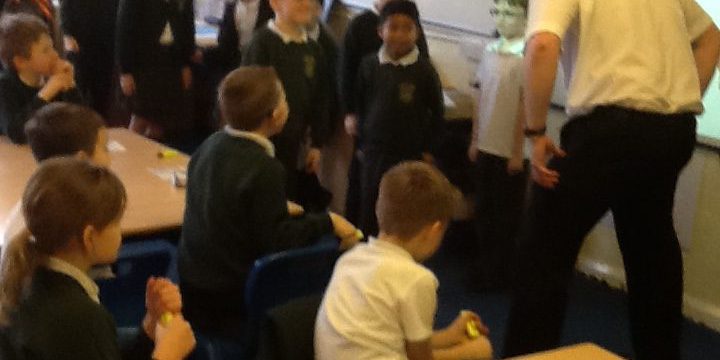 I had visited Ellel St John’s Primary a couple of times during the last two years to share the books. I was always made to feel welcome and my time valued. When Mrs Fitzgerald, the deputy headteacher, invited me back to write with some of the pupils, I jumped at the chance.

The sessions were split over two half days. During the first morning, I spent time in Year 4, 5 and 6. The theme was adventure writing and suspense. Before the visit, I had prepared a story opener set on a tropical island. The pupils started by pulling apart the text. They highlighted text/language that they felt could be used in their adventure story opener. We then discussed lots of aspects of the island, the mysterious child on the beach and how we could create suspense and tension. The pupils planned out their parallel write and the ideas were just amazing! The plan was for the children to create their first drafts the following day.

The second session started with a meeting attended by some of the parents and carers. I explained how I write the books, what I do during my visits and also suggested some ideas that I thought might be useful during home reading. The adults were lovely and it was great that they made the time to come along.

After catching my breath, I headed to Year 2. We looked at a short piece of descriptive writing I had created about a particularly nasty character called Bazza. The children came up with lots of ideas about what Bazza could do to show his character. These ideas included scowling, knuckle cracking and foot stamping! The next step was for the pupils to think how the other children would feel about Bazza. We acted out scenes from the playground at Bazza’s school and the pupils thought about things from the point of view of the other kids. A great session!

The morning concluded with a session in Year 3. The pupils pulled apart a piece of text about Bazza. We acted out different scenarios and the pupils made bullet-point notes before attempting a first draft about their version of Bazza. By the time we realised what time it was, 90 minutes had raced by and it was lunch. We just had time to hear some of the splendid first drafts. I’m excited about how fantastic they’ll be with some editing!

Big thanks go to Mrs Fitzgerald for inviting me back to spend some more time in school. Ellel St John’s Primary is a fantastic place and I thoroughly enjoyed my time there.