It’s Great To Be Back! 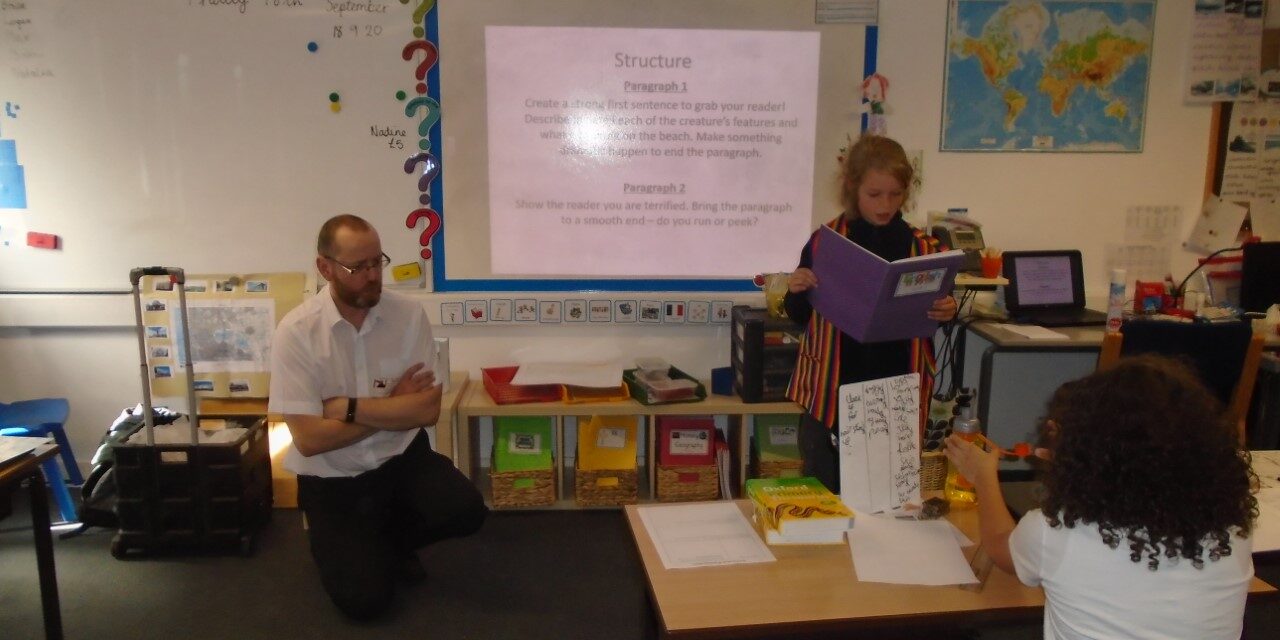 After six months out of schools due to Covid-19 it was wonderful to reboot my school events with a visit to St Johns CE Primary, Blackpool.

Year 4 had been studying one of my Impossible Tales and reading Eric Appleby: Zero To Hero as their class reader. During the morning, we picked apart an ‘unseen section’ of writing from the Tale and the children focused on a mysterious sea creature in the extract. After much planning and thought, they set to work and created a first-hand account of their interpretation of the terrifying encounter. They had to consider what they could see and how they felt. I’m sure you’ll agree the examples below are just ace. The visit was well-organised, ran smoothly, my time in school felt safe and best of all it was magical to feel the buzz of working with the children once again.

I could see a creature with a cavernous mouth and razor sharp teeth coming out of a thunderous sea! Oozing across the sand, leaving poison wherever it goes. My ears hurt as the creature let out a deep booming roar. As I walked past the creature shot a seagull with lasers that came out its eyes and ate it for its tea. I felt frozen with fear. I did not have the courage to look over the wall but I did. The creature was oozing back into the sea. I was so happy but that creature will still always be with me. The creature came back and it ate everything in its eyesight it even ate a human. My blood ran cold. I wanted to scream for help but I couldn’t. I wanted to run but it felt like the creature had stuck me to the floor.

One night I couldn’t forget just when dusk was falling a creature slithered to the dark sandy beach. Its purple spiky tentacles filled me with fear so I hid in the sand. I hoped the creature would not find me. Suddenly a gigantic golden eye got closer and closer my blood ran cold. I wanted to scream but I could not. It was like an invisible hand trapped my throat shut.

I couldn’t imagine what I saw! There was a disastrous ghost-like monster that had uncuttable horns and a gooey skinny body that looked like no type of earth creature! It looked like it came from another world! I sped up to the main pedestrian road so I would not get caught. I was stunned, it felt like my legs were glued to the floor, I was so petrified by the creatures look… I tried to call for help but nobody answered. My heart was frozen.

It was a dark stormy night when I saw a monster slithering across the beach. It had red tentacles leaving marks in the sand. It was so small it looked like it was shot with a shrink ray. I was shaking like a piece of paper in the wind. I fell to the floor. I could not get up. I used up all my energy. I saw the monster going back into the sea. I was still shaking.

That night I still remember. It’s been 12 years since my heart was hammering and I hid behind a wall. I took a peek and it’s red eye looked at me. I moved my head around the corner. I was rocking in fear. I wanted to shout my lungs out but it felt like my mouth was glued shut. Then it walked away, started to fly off and disappeared into the night sky. That night. I went home in fear. I could not sleep.