The trip to Sacred Heart Primary in Preston was a landmark visit. It was the 150th school I had visited since my writing adventure began in 2013.

The morning started with a KS2 assembly. In thirty-five minutes I managed to explain what has happened in the last four years – phew! The children found out how Eric’s stories come to life and how the Tales are created. I even put on the story waistcoat and squeezed in a performance of one of the Impossible Tales. The pupils were fab!

Next up was a writing session with Year 6. The children pulled apart an unpublished extract about a particularly nasty character. They generated lots of alternative ideas and planned out their own characters. The children completely threw themselves into the session and the room was buzzing with writing energy and enthusiasm. Ace! 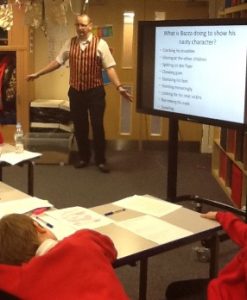 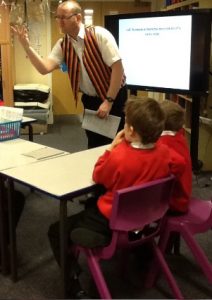 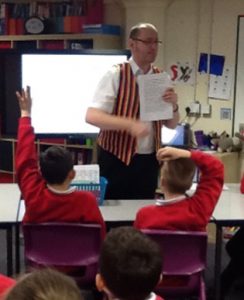 The final stop of the morning was in Year 3. The children had read Blown Away from Impossible Tales and the task for the morning was to create an alternative ending. We pulled apart my ending and discussed possible alternatives. The children talked through what they wanted to happen before they planned out their three paragraphs. I look forward to hearing how they got on with transferring their ideas into a first draft.

I had a great morning at Scared Heart Catholic Primary. Big thanks to Mrs Clark for inviting me to Sacred Heart.